Our own Brooke has become a vampire! She’s looking a little pale; could someone donate her some blood? 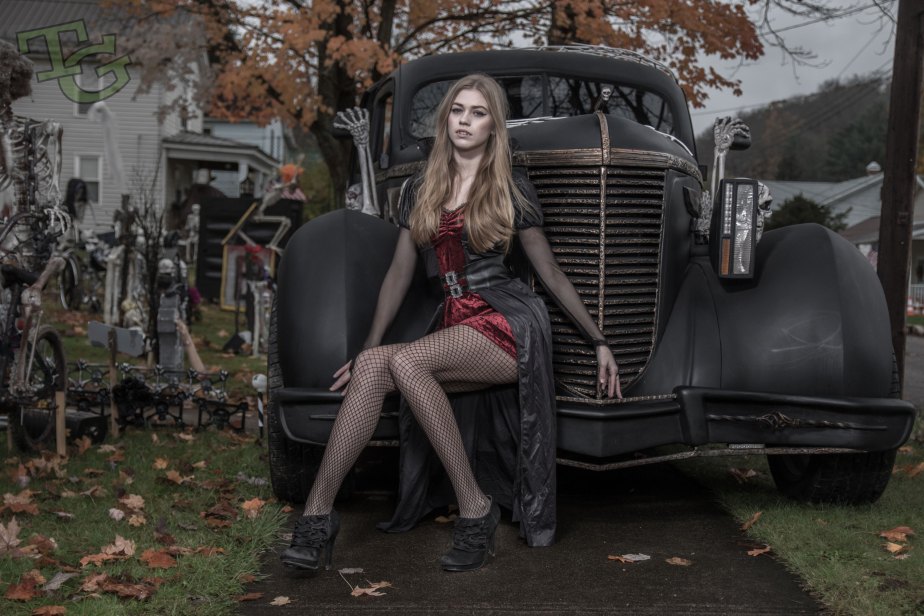 Owner George Jones calls his creation, based on a 1937 Nash, “Body Snatchers.”

So what do you do when you want to build a street rod with a little bit of a downhome farm twist? Well, if you’re Jim Aaron, you build this nifty little ride, loosely-based on a Ford 8N. Jim built himself a frame to his own specs, then mounted a 302 from a ’93 Mustang, took off the fuel injection, and replaced it with a proper carburetor. In true purist form, Jim even replaced the electronic ignition with points & condenser. He then mated a T5 transmission to the motor.

The fiberglass T-bucket kits don’t include a door, so Jim had to cut a door on the passenger side, to be authentic to the T-bucket style. This was no easy task, since he had to bond the inner and outer shells together so they would match when cut. The 9N tractor hood had to be widened 6”, and the dashboard had to be raised 1 ½”.

The custom windshield features a beautiful etched rendering of the Pennsylvania farm where Jim grew up. 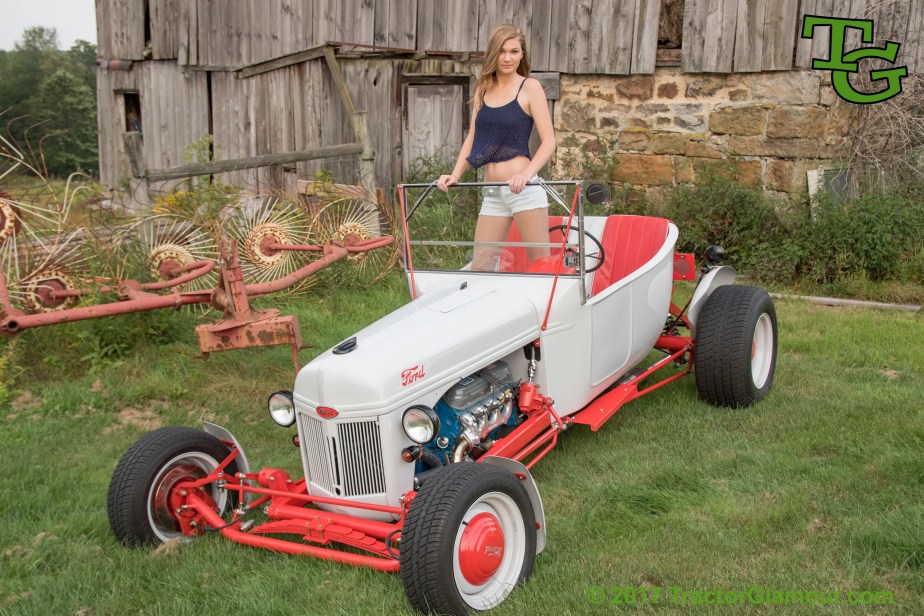 The steering wheel is Cub Cadet, with a shaving cream cap used as a center cap. The steering column is hand-made and uses a Chevy Vega box. Front suspension is standard street rod fare, but the axle is custom and bent specifically for the car’s layout. The front shocks are genuine Ford Model A. The front fenders are actually single fender off-the-shelf product, but halved to make two.

The functional rear-end is Ford F-150, cut down to accommodate two short axles. The draw bar and lift links are genuine Ford tractor. The rear fenders are from an Economy lawn tractor. The mock tractor rear-end cover consists of two halves of a flower pot that Jim glassed, and the center piece conceals the car’s fuel tank. 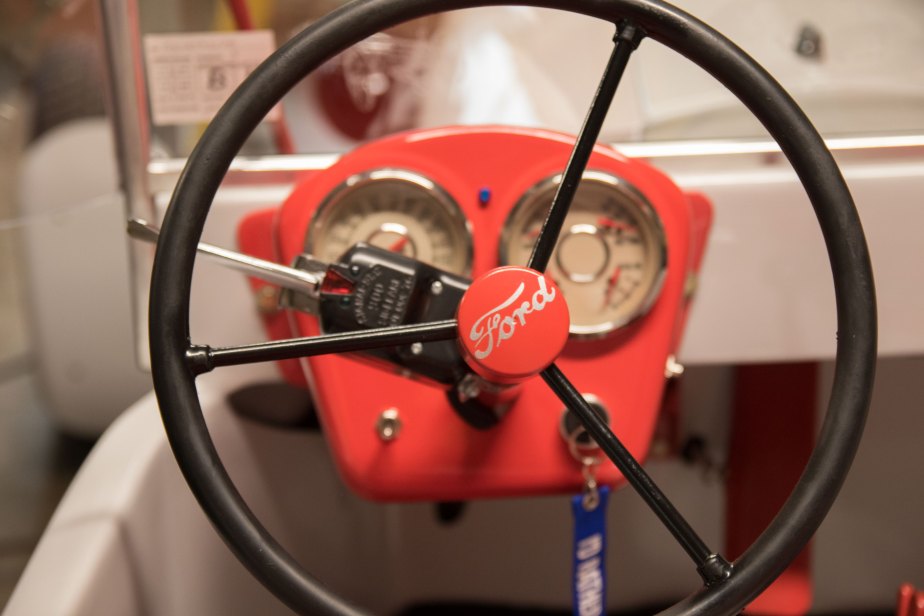 Just in time for football season, we found this wacky 1939 Ford 9n all decked out in black & gold. The owner told us he found this tractor unrestored, except for a new seat the previous owner had put on it. The seat was black and yellow. So it inspired him to just do the whole rest of the tractor to match the seat, and a Steeler theme was born. We recruited the radiant Danniella Donahue to adorn this old classic. 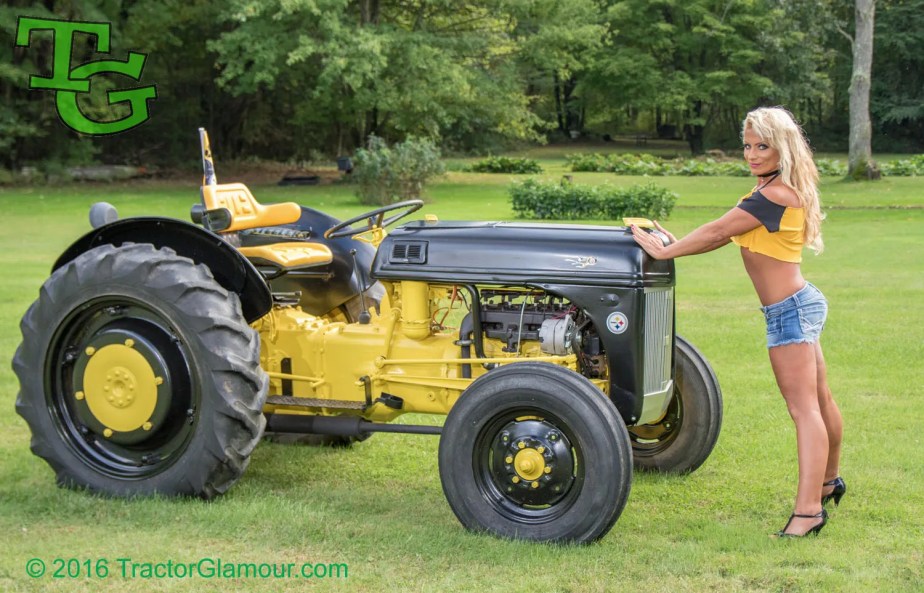 Our August installment features this beautiful 1963 Cub Cadet, one of the earliest of the Cubs; restored by Jeremy Haag, and presented by the lovely Brooke. 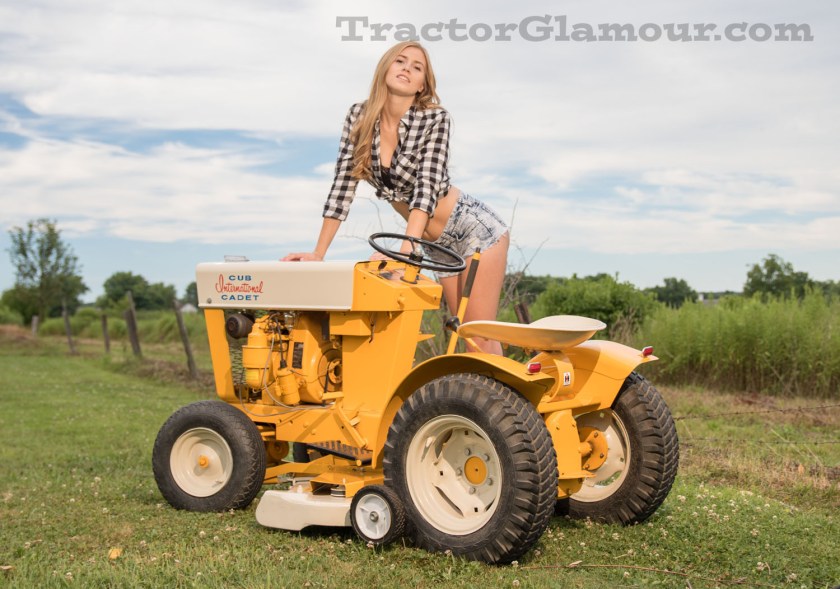